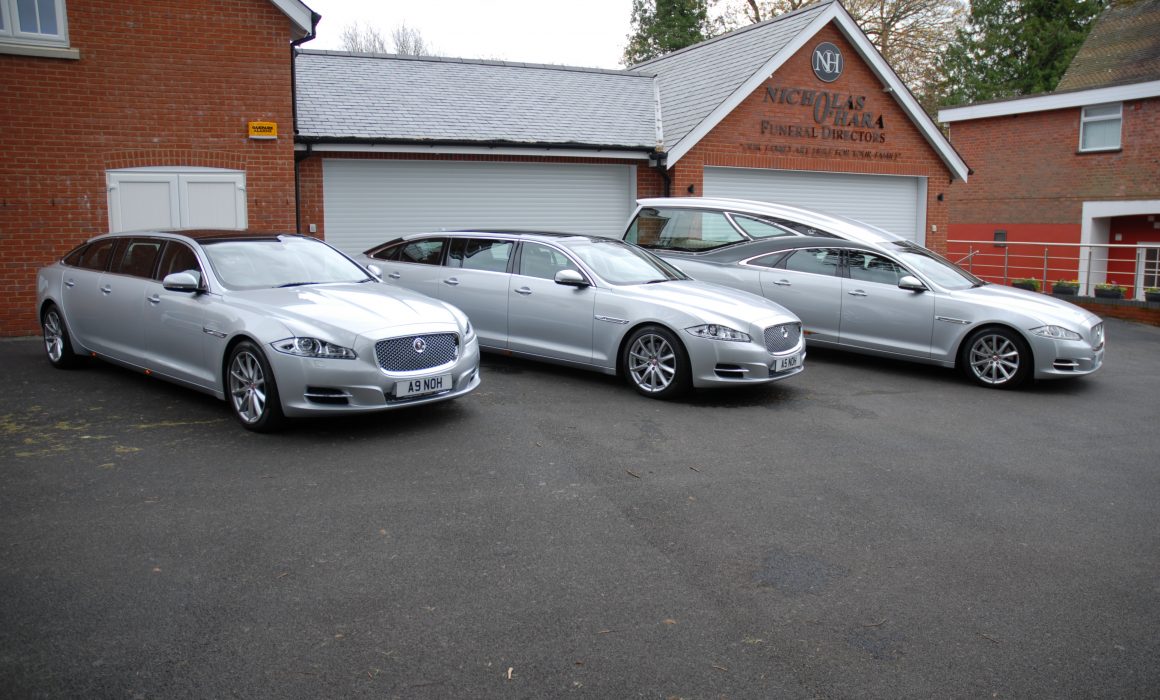 November 2015 on a wet day saw the arrival of the two latest additions to the O’Hara fleet when Superior UK delivered what is believed to be the first two Jaguar based limousines made outside of the UK.

Earlier that year Nicholas and Anthony visited Pilato’s factory in Treviso, Italy to discuss their new hearse requirements and asked them to consider building them two limousines as they felt that the coach-building work undertaken by Pilato was far greater than any other and this reflected their ethos of everything being to the highest possible standard.

The limousines have unique glass roofs, executive seating in the middle row and are finished in the companies usual distinctive silver livery for which they are renowned.

Big thanks to all Superior UK and Pilato in creating these beautiful vehicles to our exact specifications. 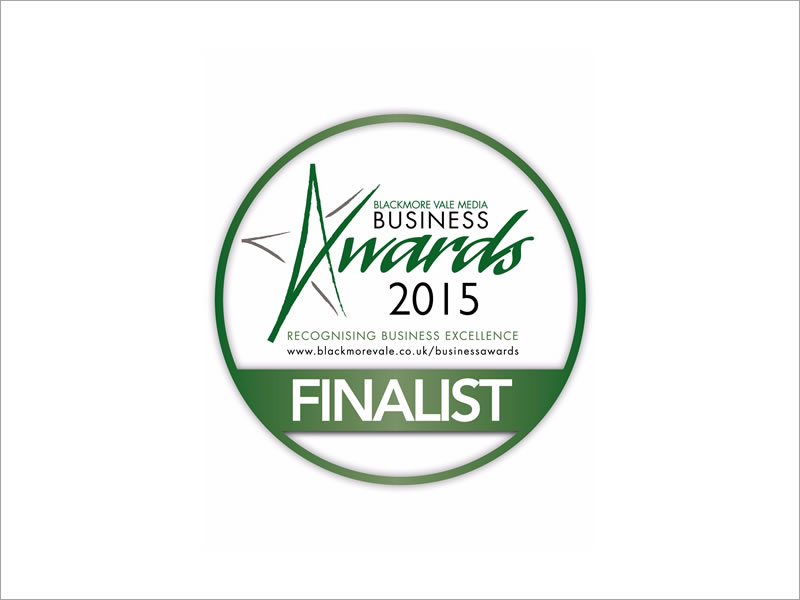 On 17th September Nicholas O’Hara Funeral Directors were named winners of the Blackmore Media Award for Excellence in Customer Service.

The award was collected by Anthony, Natalie and the team of funeral directors and it was a very proud moment to be recognised for the factor that drives our business to give the upmost in customer service and care and to be recognised for this by an independent panel of judges made it feel even more special.

Also on the night the business was a in the final three for Family Business of the Year (this award was won RJ Balson Butchers of Bridport who were celebrating 500 years of business and so were very worthy winners!)

Finally Anthony presented the award they had sponsored for business of silver excellence to BV Dairy for the amazing continued work they do.

Nicholas O’Hara are proud to have their new website up and running with full compatibility with tablets and mobile phones. The new website offers more sections on the history, the achievements, the offices and staff of the company and a testimonials page where past families have kindly allowed their messages of thanks to be shown.

What is a first for Dorset is in conjunction with Funeral Zone they now offer their unique facility of online obituaries – this allows families to host a page for their loved one, to post pictures, to receive messages and memories from friends, candles can be lit in their memory. the funeral details can be shared, social media can be linked and donations can be made where possible via Just Giving to the chosen charity. This is all offered as a free service by the family business as they believe that it gives families the chance to be able to have a focal point for all their own and their friends memories and tributes. With the growth of social media other sites would have a page which in time may disappear or not be found where this will sit on our website for as long as a family wishes. It’s final act is that a book can be bought and created by the family from all the messages, tributes and pictures that where posted to the page and this we believe will help with the grief journey as it is a solid and tactile product that can be revisited whenever it is needed.

Take a look at our obituaries page to discover more….

Not only our Nicholas O’Hara proud sponsors of the Business of Silver Excellence category at the Blackmore Media Awards they have themselves made the final three in both the Family Business and Customer Service categories.

When asked to sponsor an award the business were proud to be involved and have had great pleasure visiting the finalists for their section and seeing the interesting and diverse businesses that are based within the blackmore region. The company were last week themselves judged by the sponsors of the awards they are finalists in and very much look forward to the Awards dinner and evening on Thursday 17th September at The George Albert Hotel,  near Dorchester where they will have the opportunity to present their winner with the award. Watch this space for more news on the winner  and how the company faired on the night too!! 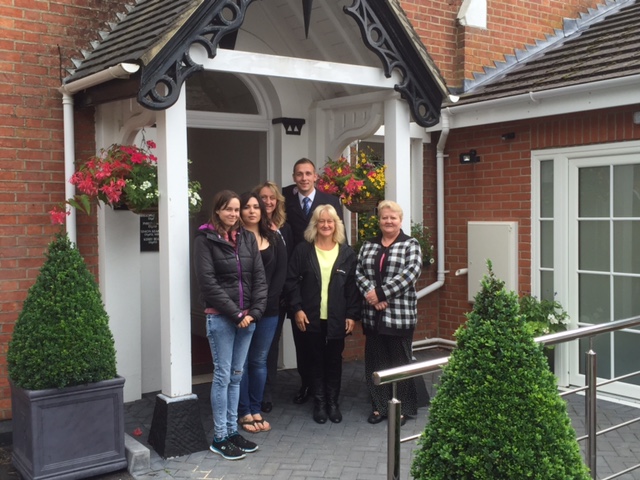 Throughout 2015 Nicholas O’Hara’s team have been providing training to staff from nursing/care homes, GP surgeries and trainee nurses on the role of a funeral director.

An invitation was sent to many local care homes and at this time around 200 staff have attended with many more booked for days through the rest of the year. The days have included a tour of their premises, discussions on the many roles a funeral director undertakes, providing information and knowledge on some of the procedures involved a tour of a local crematorium and an embalming demonstration in the companies new state of the art theatre and mortuary. This final part of the day has been the most interesting and rewarding for the attendees to see why we care for each deceased in this hygienic and respectful way.

At the end of each session certificates are given to each attendee in recognition of their attendance and experience. 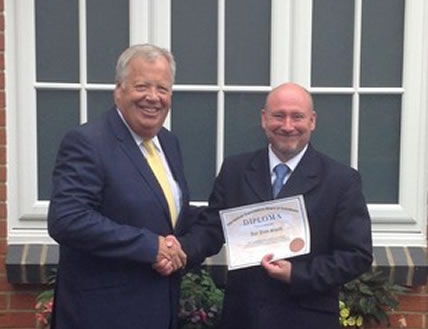 Nicholas O’Hara Funeral Directors staff member Ian Smith had reason to celebrate this week after receiving his results for his embalming exams. Ian who has been with the family business since 2011 started as a funeral operative and it fast became apparent he had both the right skills mentally and practically to further himself within the company. Ian along with Nicholas visited some of the embalming schools around the South of England and he was accepted into his first choice in London, where he started his weekly training in the autumn of 2013.

Nicholas said “we are so very proud of Ian, he went back to school to learn a whole new topic and this I regard as one of the most difficult but important in the funeral industry as an embalmer’s work is to be able to let families visit their loved ones and let them have their own personal and positive experience of saying goodbye. The care of the deceased is what we are foremost employed to do and the embalmer’s role is very much this. The role is very much behind the scenes and the feedback we have from families is why it means so much to be able to let them have this final opportunity. For Ian to score 90% and 97% in his practical exams after already passing his theory is a huge result for him and he should be proud of himself too”

Ian himself cannot thank both his tutors, his family and his colleagues for the support they have given him. “Nicholas has supported me in every way and when my tutor visited our new mortuary and theatre he was blown away by it, as have both our recent inspectors from funeral trade bodies, that they rated these facilities second to none anywhere in the UK. I feel privileged to work in them and because we are proud of them we invite local care homes to visit them and learn all about what our roles are.”

Ian has received his European licence to practice embalming and has now applied to be a full member of the British Institute of Embalmers, joining Nicholas and colleague Simon as diploma holders in this field, the company also boasts seven diploma holding funeral directors too. 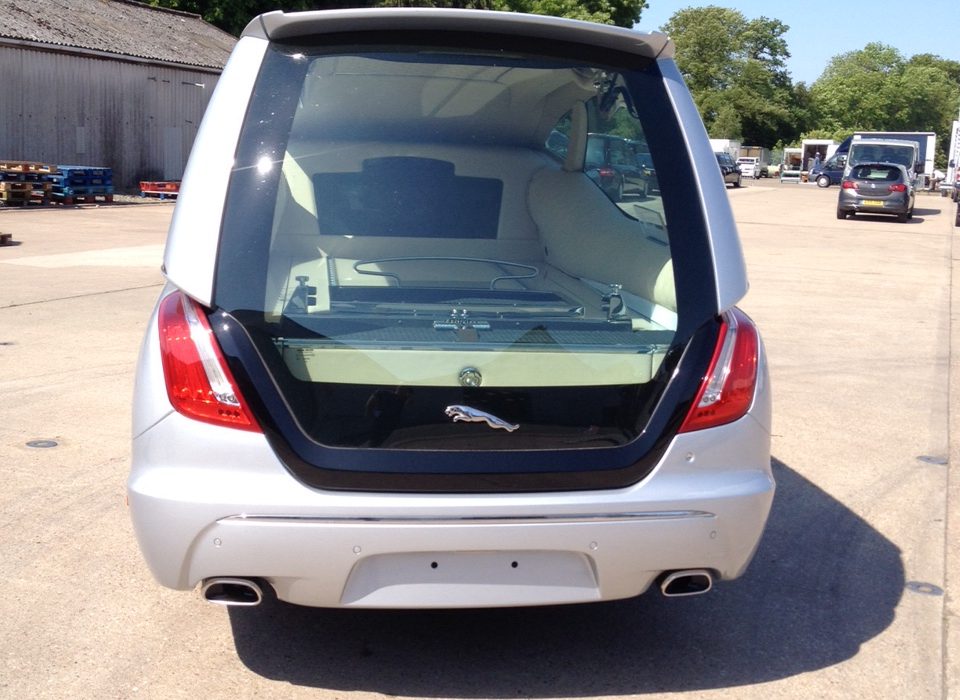 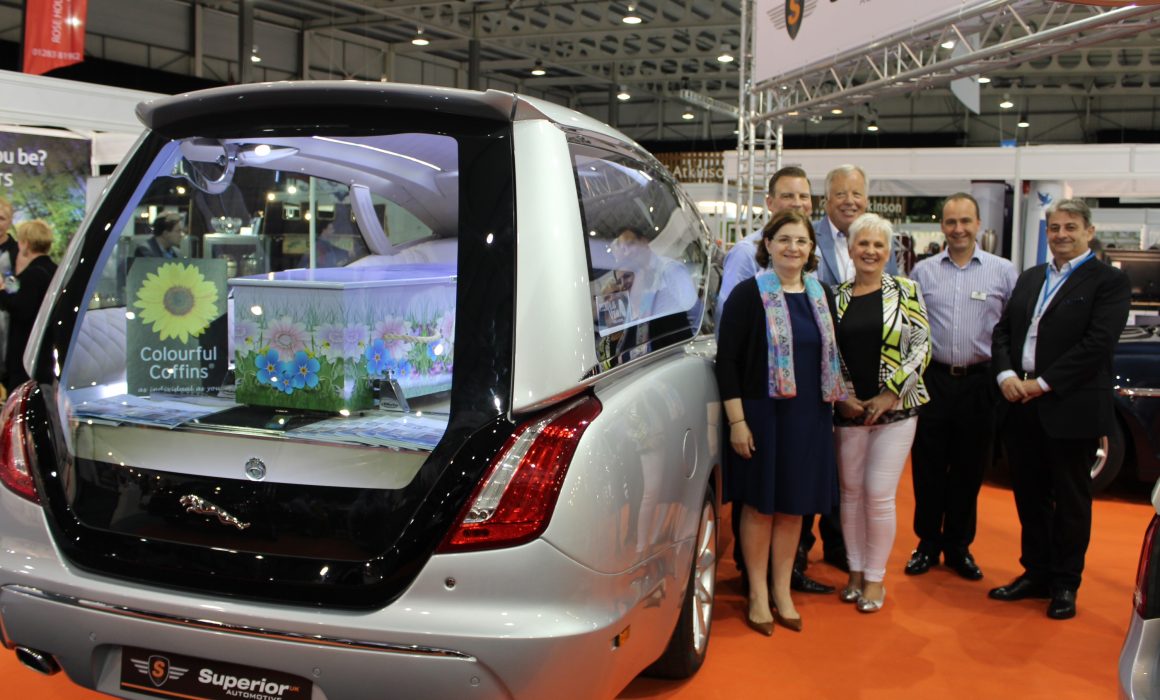 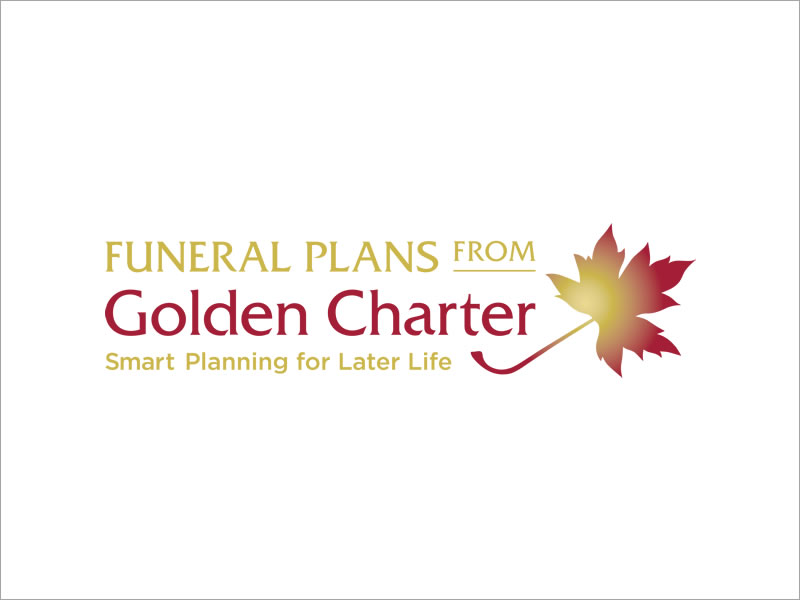 With the introduction from Golden Charter Legal Services of their full range of products including Will writing, Pre-paid Probate, Power of Attorney and Family Protection Trust’s we now are ableto offer a free simple Will (usual price £99) with each funeral plan purchased during 2015.

The will product is not a discount but if you do not wish to have for yourself they are fully transferable to use for any family member or even friend you may wish to give it too. You can also use the £99 as an upgrade to have a Will with storage and updates for £200 (usual price £299) . 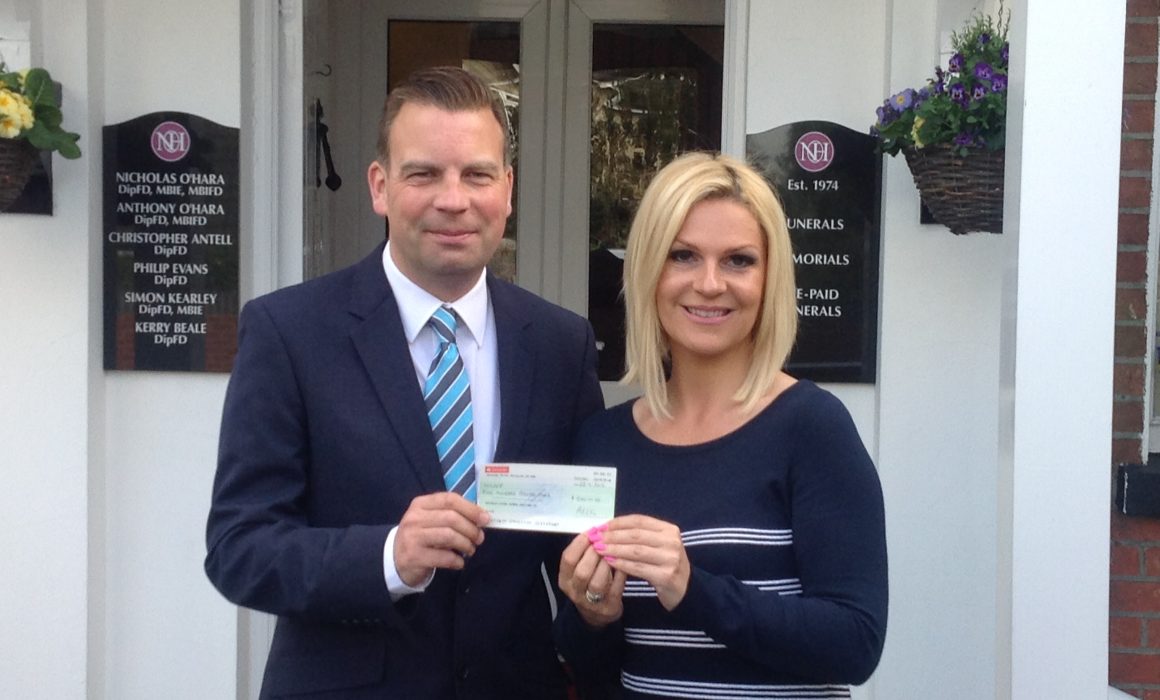 In April Anthony O’Hara presented to Natasha Jones founder of charity LEAF a cheque for £500 from the donation they make for every funeral plan purchased. Anthony said  “This year the interest in and actual funeral plan sales has been incredible and we have seen this market more than double in just the last 12 months. This I believe is down to public awareness, people wishing to plan ahead and remove that issue of burden and financial worry for their loved ones and the great financing options we now have available”.

As of 1st June we will be offering a free simple will with each funeral plan purchased and these are created by Golden Charter Legal Services.

LEAF we hope through this donation and the more we aim to raise this year will be able to continue the amazing work they do in supporting and educating those and their families who have been diagnosed with Leukemia.